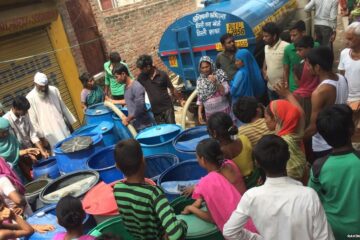 The Delhi Jal Board in the the Eleventh Plan had charted out plans for the supply of drinking water services for all slum localities mainly with the help of two schemes viz., Grant in Aid for Augmentation of Water Supply in JJ Clusters & the Water Supply in Resettlement Colonies. The Delhi government’s policy however, did not suggest anything specific to JJ Clusters but envisioned provisions for water for all and public education and awareness regarding efficient water usage as proposed by the policy statements. In the same year, the State government of Delhi announced the Jal Adhikar Connection Policy for residents of JJ colonies. It aimed at providing legally recognised water connections to people living in the slums, along with a 100 percent waiver with respect to late payment surcharge for commercial consumptions amounting to Rs. 1,100 crores. However, there is a significant dependency in functions of governance with respect to the multiple institutions mainly the Delhi Development Authority (DDA), the Municipal Corporation of Delhi (MCD) and other State agencies across the city which affect the supply of water to the slums and JJ colonies of Delhi. For example, the MCD as well as the Delhi Urban Shelter Improvement Board (DUSIB) are in charge of local sanitation, which is crucial to the supply and safe utilisation of water. This means there is a multiplicity of authorities responsible for water supply procedure for the slums areas of Delhi, which can result in non delivery or failure of clean and effective water supply in Delhi’s densely populated and unregularised slum areas. END_OF_DOCUMENT_TOKEN_TO_BE_REPLACED