Effects of Commencement of the Minimum Wages Act

The concept of minimum wages first evolved with reference to remuneration of workers in those industries where the level of wages was substantially low as compared to the wages for similar types of labour in other industries. As far back as 1928, the International Labour Conference of International Labour Organization, at Geneva, adopted a draft convention on minimum wages requiring the member countries to create and maintain a machinery whereby minimum rates of wages can be fixed for workers employed in industries in which no arrangements exist for the effective regulation of wages and where wages are exceptionally low. Also, at the Preparatory Asian Regional Labour Conference of ILO held at New Delhi in 1947 and then at the 3rd session of the Asian Regional Labour conference, it was approved that every effort should be made to improve wage standards in industries and occupations in Asian countries, where they are still low.

Thus, the need of legislation for fixation of minimum wages in India received an impetus after World War II, on account of the necessity of protecting the interest of demobilized personnel seeking employment in industries. A bill to provide for machinery for fixing and revision of minimum wages was prepared and discussed at the 7th session of the Indian Labour Conference in November, 1945. It was introduced in the Central Legislative Assembly on 11th April, 1946.[2]

The Act requires the Central and State Government to fix minimum rates of wages in certain scheduled employments. It seeks to prevent “sweated labour and exploitation of labour”. The State Governments are empowered to add to the schedule new industries. Wage rates under the Act are fixed and notified by the Central Government and State Governments in their respective spheres. The Act also empowers the appropriate government to appoint committees and sub-committees to advise on fixation and revision on minimum wage rates and an Advisory Board[3] has been established for the purpose of coordinating the work of the committee. A Central Minimum wages Advisory Board[4] has also been set up under the Act to advise the Central and State Governments on this subject. The Board keeps pursuing the need for more frequent revisions of Minimum Wages for various classes of employees. The Act covers all employees who are engaged to do any work, whether skilled, manual or clerical, in any scheduled employment including any worker to whom articles or materials are given out by another person for manufacturing or processing in his own house or elsewhere.[5]

Constitutionality of the Act

The provisions of this Act were challenged on the ground that they are violative of Article 19 (1) (g)[6] of the Constitution of India but the Supreme Court of India in Bijoy Cotton Mills Ltd. v. State of Ajmer,[7] held the Act constitutional. “It can scarcely be disputed that securing of living wages to labourers which ensure not only bare physical subsistence but also the maintenance of health and decency, is conducive to the general interest of the public. This is one of the Directive Principles of State Policy (DPSP) embodied in Article 43[8] of the Constitution”.

Comparing labour costs is always a difficult task because different countries have different ways and mechanisms of measuring these. India, for example, imposes different minimum wage levels dependent upon specific work sectors, whereas China levies a minimum wage across the board irrespective of employment type. However, as the population demographics are now shifting to a younger workforce in India from China, such comparisons, while not exact, provide some clues about the nature of costs associated within the labour pools of each.

In this survey[9], seven cities in both China and India in 2013 have been shown to provide a general geographic spread in both countries. The minimum wage levels in each country are set by the respective state and provincial governments. The results are as follows: 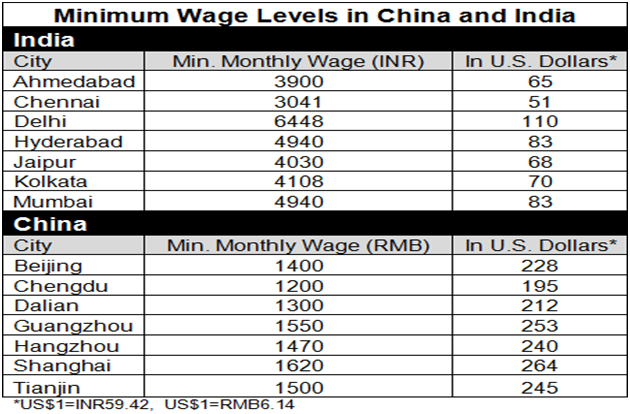 It should be noted that in China, a mandatory welfare payment is added to the minimum wage as paid by the employer and this typically adds an average 30 percent to 50 percent on top of the minimum wage identified above. India does not levy a uniform welfare payment upon salaries, and this can either be discounted completely or is a typical maximum of 10 percent of wages. The figures adequately demonstrate that Chinese minimum wages are two or three times the level of their Indian counterparts, and even higher when welfare payments are added on top. This bears out our previous findings that China now has one of the highest employment costs in emerging Asia and that the population demographics now favor India.

In India, the development of a large, yet young labor force with an average age of 23 is showing itself in lower minimum salary levels. In China, however, where the average age of a worker is now 37, the higher minimum wage and more expensive welfare to cater for that age is now having a significant effect in demonstrating the labor cost gap. The message for labor-intensive industries is clear – India is now a key market for establishing operations.[10]

The government in 2013 cleared a proposal to make the minimum wages announced by the centre for workers in unorganized sector statutory for all states so as to bring parity in wages paid. At present, the national floor level minimum wage is Rs.115 per day but since it is not binding on states and employers, the centre merely advises the states to raise the wages so that they are on par with the national floor level.

The Union cabinet cleared the proposal to bring in an amendment to the Minimum Wages Act, 1948, for incorporating the statutory provision.

In February, 2014, taking strong exception to government’s “inaction” in amending the Minimum Wages Act to make it more deterrent for violators, a Parliamentary committee has held it is high time penal provisions in the Act as well as other such acts be revised soon. The committee said that even after eight years of drafting of the proposal, the amendments are yet to be enacted by Parliament. The Standing Committee on Labour on demands for grants of the Ministry of Labour and Employment for 2013-14 also reiterated its recommendation for linking it with the price index and size of the establishment or profit margin of the violators in case of violation of any of the provisions of the Act. The committee has also taken strong exception to the fact that the government did not feel the need to revisit the amendment proposal to the Minimum Wages Act, 1948 drafted in 2005 on the “spacious plea” that the Central Advisory Board had recommended for a revision of the penalty provisions.[11]

From the above discussions, the following conclusions may be drawn:

[6] To practice any profession, or to carryon any occupation, trade or business.

The COVID crisis has brought out one of the major downsides of the gig economy. With the current model that majorly favors the employers and has no protection for the employee in times of crisis, Read more…

India, one of the most populous countries in the world, can accrue a lot of benefits from its labor market. There lies the immense potential for India to be the largest provider of skilled labor Read more…

The Kisan Long March of 2018 brought the grave situation of agrarian distress to the fore and built a consensus demanding policy intervention. Thus, the announcement of the PM Kisan Samman Nidhi Scheme (PM- KISAN) Read more…