The Land of Serendipity in Communal Trouble

The land of serendipity, full of immense flora and fauna, enriched with history, an abode to multifarious ethnicities, cultures, and languages, sitting at the heart of Indian Ocean, is the island of Sri Lanka. However, amidst all its beauty and glory, this island nation is blemished with political and racial tensions which lead to hostile conditions in the country.

The country has had its bouts with emergencies. Sri Lanka has always been a country which has used emergency regulations in an exorbitant manner and they have been declared in the country continuously, barring small intervals since 1971, on account of crisis like riots, natural disasters, and strikes.

However, this extreme use of emergencies for a prolonged period of time has led to blots on the legal framework of the Country, thus blurring the fine line between normal laws and emergency laws. This sort of a situation leads to a sense of perplexity in the minds of the citizens with regards to exercising their rights of freedom and association. 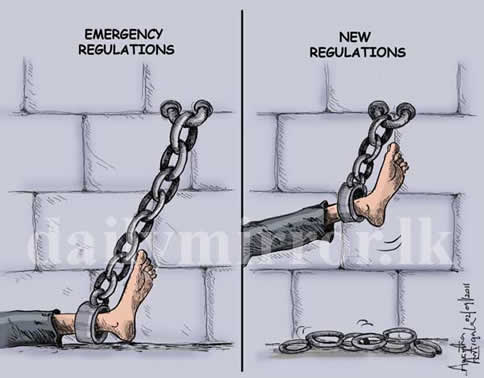 The past emergency declared by the Sri Lankan government during Black July of 1983 was on account of extensive riots that took place in the country because of a civil war between the minority Tamils (Liberation Tigers of Tamil Eelam) and the majority Sinhalese. This had lead to about 3000 deaths and wreckage of approximately 8000 homes and 5000 shops costing Sri Lanka a mammoth sum of 300 Million USD.

After a delay of 28 years, the government had finally repealed the state of emergency, with aid from Amnesty International. The repeal materialized when the Sri Lankan government felt immense international pressure and was expected to take a stand by undertaking real reforms such as repealing the Prevention of Terrorism Act (Sri Lanka), which is a repressive measure lending authority to the government to hold detainees arbitrarily for prolonged periods of time sans trial. International organizations and other countries also hoped that Sri Lanka will hold itself accountable for all those who had to endure hardships in any manner, during the civil war, as was promised by the country earlier.

Quite similar was the case of the recent 12 day state of emergency, declared on 6th March, 2018; owed to the Buddhist-Muslim clashes in the Kandy district. The clashes were triggered after the assault of a Sinhalese man, by a mob in the district of Theldeniya. The clashes and violence took a grave turn after a young Muslim boy Abdul Basith lost his life at the hands of a mob. Since the situation was going out of control, police curfew was declared.

After the riots consumed 150 shops, vehicles, homes, and two lives in two days, the emergency was called out. The police, army, navy and the air force of Sri Lanka were empowered to arrest anyone and everyone who attempted to create violence or communal disharmony, and sentence them to life imprisonment.

It is also not a hidden fact that the impact of the unrest and emergency was, a strong blow to the Sri Lankan economy, tourism, and education system. The country’s shares took a steep downfall due to the communal violence in the country. Despite the claims of the Tourism Development Authority, about the absence of immediate impact on the tourism sector, it faced a major setback. This was also owing to the fact that foreign governments had issued travel warnings post the declaration of the state of emergency. Due to the emergency, the schools were shut down and that had an adverse impact on the education sector as well.

The Sri Lankan government has used this emergency as a veil to cover up for the fact that it hasn’t been able to bring harmony between the majority and the minorities in the country. The root cause of riots which advanced into an emergency was basically racist violence between the Sinhalese Buddhists, comprising of 70.2% of the population and the Muslims, comprising of 9.7% of the population. The strain between the two communities had been mushrooming over the past few years on account of many religious and socio-political motives. In June 2014, there were similar riots which had left four people dead and many injured. Similar episodes had occurred in November 2017 and February 2018 as well.

Inaction on part of the government has not only left the minority Tamils and Muslims in a state of exasperation, but has managed to convey to the majority Sinhalese, that they are always going to be provided with a safe haven, due to their large numbers and because the ruling authorities feel daunted in calling a spade a spade, not once, but multiple times. 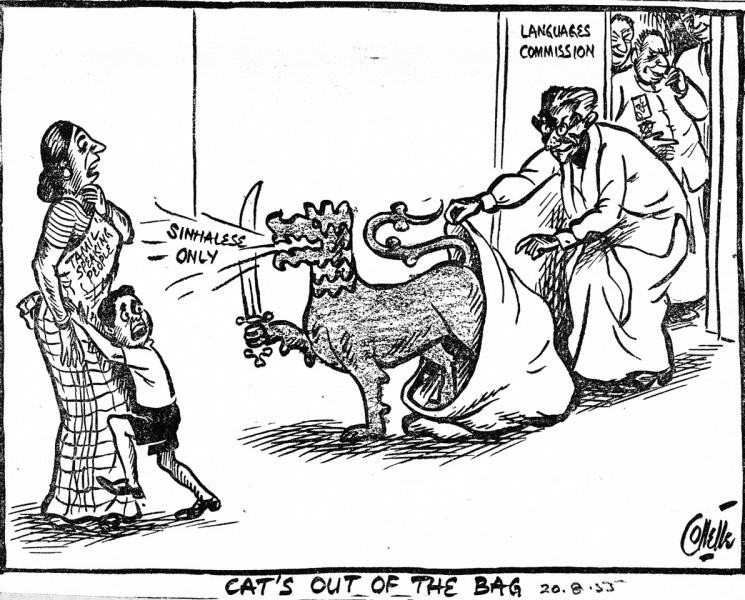 Even after the three decade Civil War, the government does not opt to address the main issue of communal and racial violence but prefers to simply contain the violence as and when it happens by imposing emergencies.

The government and police have been mere spectators, sidelining themselves from communal violence which has been resulting in horrendous violations of the basic constitutional and human rights of the minorities. Had the police, armed forces and the law enforcers done their part in curbing and controlling the turmoil and bringing in fair and equal treatment for all communities, the entire emergency situation could have been avoided with ease. It is high time, the Sri Lankan government takes full responsibility for all the mishaps perpetrating in the country and protect the rights and interests of the ethnic groups, to safeguard themselves from another Civil War.

APEC Forum, 2020: Addressing the pandemic and the road to recovery

The 27th APEC Economic Leaders’ Meeting was convened on the 20th of November, 2020 with the presence of all 21 members of the organization for the first time in two years, as the annual meeting Read more…

The Rivers of My Home: A take on the MoU Signing of Bangladesh and India, and what it may mean for the future of the two nations

By Twinkle Jaspal, Amity Institute of Anthropology, NOIDA. (Prime Minister of Bangladesh, Sheikh Hasina and Prime Minister of India, Narendra Modi) On October 5, 2019, a Memorandum of Understanding was signed between the countries of Read more…

By Kaushiki Kar, South Calcutta Law College, Kolkata. Right to life is one of the basic human rights and not even the State has the authority to violate that right. Protection of life and personal liberty in Read more…