Energy Access in India: Is the Disadvantaged Strata Excluded?

Around 940  billion people in the world do not have access to electricity and more than 3 billion people suffer because of lack of access to clean cooking fuels. Since independence, India has made substantial progress, however, it has a huge population, deprived of access to energy, chiefly amongst the vulnerable sections of its population. The Census of 2011 highlights that only 30% households have access to clean fuels out of which only 12% is constituted by the rural population. A research states that tribal populations and people of lower caste have 10-30% less access to clean cooking fuel and electricity majorly due to the caste system and rigid hierarchies in the society.

The Planning Commission articulated the Integrated Energy Policy in 2005, which aimed at estimating the total energy demand rather than focusing on the level of energy required to wipe out poverty from the country and ensure energy security in a sustainable manner. Does neglecting the disadvantaged sections justify the objectives of the policy? Had the government included the entire population, it would have been a possibility that the situation might have improved and access to clean energy might not have been subject to someone’s economic status. The policy also did not deal comprehensively with gender issues and its concerns. No improvements have taken place since Census 2011, which reflects that 67.4% of households still depend upon solid biomass. It also fails to provide solutions for the environmental damage and indoor air pollution caused by the firewood, dung cake etc., used mainly by the disadvantaged sections due to lack of access and affordability of cleaner sources of cooking fuel.

The Electricity Act, 2003 also remained ineffective since it talks about electrifying every household but the rural areas lack infrastructure which is vital for supply of power. If adequate infrastructure is not developed, the equitable distribution of energy amongst all sections of the society is not possible. The Working Group on Power had represented its twelfth plan in 2012 which visualized not only increasing the power generation in the country but also ensuring that such power and benefits reach the poor and vulnerable sections of the society by shifting focus to renewable sources of energy. It is worth noting that though the policy aimed at targeting the poor and vulnerable sections, no recommendation was made as to how the targets can be approached and achieved, thereby leaving the policy in a faded hue. Even though provisions were made for renewable energy for rural areas, no step has been taken to comprehensively exploit the resources through decentralized mechanisms and in fact, there is an altogether disregard for the disadvantaged sections.

National Electricity Policy has under its rural electrification goals emphasized that special attention shall be given to the household of Dalits and tribal groups along with other weaker sections. It further asserted that subsidies should reach the targeted groups. Necessary institutional frameworks have been made to operate and maintain supply systems for reliable supply to consumers. However, no institutional framework has been devised to monitor the supply and electrification of houses of tribal areas or the weaker sections. Therefore, the special focus on weaker strata of the population gets diluted with the no effective authority to look over the targeted channelizing of resources.

Until 2015, before implementation of Deen Dayal Upadhyaya Gram Jyoti Yojana (DDUJY), the primary focus was just on electrifying villages and not on access to clean fuels. It was in 2016 when the government launched Pradhan Mantri Ujjwala Yojana (PMUY), aimed at providing free LPG connections to not only people of the Below Poverty Line (BPL) category, but also households that come under the purview of Socio-Economic Caste Census (SECC) and disadvantaged sections. The government also launched Pradhan Mantri Sahaj Bijli Har Ghar Yojana i.e., Saubhagya in October 2017. These flagship schemes are commendable at the forefront. However, the issue goes beyond giving connections and hence, calls for reliable supply and sustained use. These schemes also lack monitoring and collection of data to acquire authentic feedback. Also, the schemes do not consider the analysis of the number of households impacted. There has been no updated data, regarding energy demand of households since ACCESS 2015 and absolutely no data since a long time on demand of households belonging to disadvantaged sections. The only source of information for household consumption was the NSSO Survey that too was conducted in 2012. The sector calls for periodic review and data analysis to trace whether benefits reach targeted sections or not. Mere furnishing of data from the supply side won’t help if no data has been collected from demand’s side. The most cited work internationally, i.e., The Energy Progress Report developed by WHO, International Renewable Energy Agency, UN Statistics Division and the World Bank is also limited to the idea that it merely talks about connections. If 10% of the houses and facilities are connected to the grid, then it would imply that the village is electrified. This is misleading as many houses are left unelectrified and even if electrified, receive irregular electric supply. IEA along with NITI Aayog conducted an in-depth review of India’s energy policies, wherein it has appreciated the country’s efforts in promoting clean energy and boosting production of renewable energy. The report elucidates about 23% growth in renewables in India and states how the country is successfully managing the issue of climate change and renewable energy. It considers the plight of people belonging to the BPL but fails to address the issue of access to clean energy to the disadvantaged section of the population.

However, on a positive note the flagship scheme of PMUY has somewhat reduced the inequitable access by different groups to LPG. A report suggests that there has been an increase in use of households using LPG from 12 to 55%, 8 to 38% and 22 to 56% in SC, ST and OBC categories respectively from 2015 to 2018. But along with considering connections, the government must also focus on demand and hence, supply in consonance with such demand since accessibility and affordability have always been a constriction. 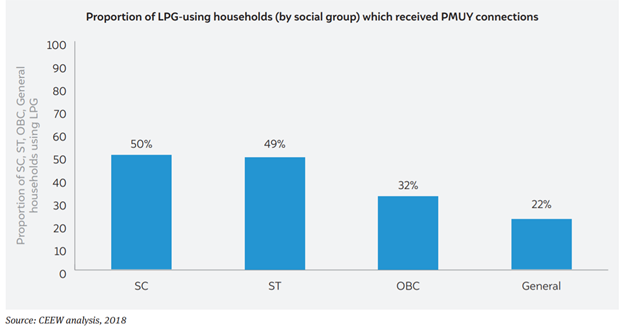 People belonging to Scheduled Castes, Scheduled Tribes and religious minority communities have lived in the socio-economically backward regions and remote places in rural areas, whereas in urban areas, they are mainly found in ghettos which are devoid of any basic living amenities. The situation becomes worse due to unfavorable factors like poor income, lack of social security, along with other determinants necessary for acquiring modern sources of energy at a household level. Thus access and affordability to clean fuels is largely impeded due to logistical bottlenecks along with the economic roadblocks arising out of stigma and biases.

The National Policy for Women in 2016, has focused on the issues pertaining to the inter-sectional balance between gender issues and energy access under the head of environment and climate change. However, efforts must be made in this respect to provide impetus to related policies. The government policies fail to address gender concerns of energy access in a household. Women SHGs need to be employed and sensitized to spread awareness about everyone’s right to access electricity and clean fuels as lack of information in this regard remains a major bottleneck. Also, energy production, distribution and improving access should be linked with women empowerment as suggested by international standards too.

As also recommended in the National Planning Commission’s Discussion Paper on Energy, there is a pressing need to develop infrastructure to meet the country’s energy requirements. There should be transparency in the working of the system so as to make authorities accountable for the defaults. The required legislative changes shall be catered to so that there is efficiency in supply and necessary services to be the priority. Technology should be used in such a way that it encompasses the entire country especially the vulnerable sections for access and affordability of energy. The government must emphasize on equitable distribution of energy rather than favoring the big business stakeholders. The local authorities must be strengthened to deliver benefits efficiently. The distribution of energy to vulnerable strata of society shall be monitored by the municipality. The urban- rural divide due to supply and use of modern clean fuels should be addressed and dissolved. Multidimensional assessments at multi-tier level are required to keep a track of access and utilization along with increase in connections. The idea of multiple ministries  involved to cater to the specific needs of citizens is praiseworthy, but there must be better cooperation and specific division of responsibilities between different ministries.

It is evident that the time has arrived for the governments to pay heed to the underserved communities of the population, otherwise the country will never be able to achieve the target of universal electrification and might also fall short of attaining its targets under the SDGs. Access to energy is an important determinant of human capital and hence, India in order to become economically sustainable and self reliant, must ensure that energy is accessible to all irrespective of social and economic class.