The Prevention of Cruelty to Animals Act: An Insight

By Rishabh Mishra, National University of Study and Research in Law, Ranchi. 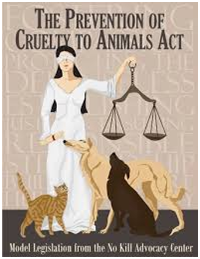 The evolution of the intellectual faculties of humans has placed them in a position of   dominance over other species. The ability to reason as a human has very little to do with the fact that our sufferings lie on the same footing as to those of the animals surrounding us. This similarity casts a moral obligation upon us to alleviate the pain and suffering of animals as the same is a result of human actions.

The Prevention of Cruelty to Animals Act 1960, was enacted with a similar object, that is, to prevent the infliction of unnecessary pain and suffering on animals. The Act vests every person with the duty to take all reasonable care in order to ensure the welfare of such animals. The Act consists of six chapters and forty-one sections, addressing crucial points, such as cruelty to animals, their training and experimentation.

Under the Act, the term animal is defined as ‘any living creature other than a human’. Section 11 of the Act deliberates on various acts of cruelty towards animals, including beating, kicking overriding, over-driving or overloading of any animal, employment of unfit animals, administration of injurious drugs to them, confining or carrying them in compact cages, failing to provide food, water and shelter and mutilating or killing any animal. Declaring cruelty to animals as an offence, the Section provides for a maximum fine of One Hundred Rupees and imprisonment, which may extend to a term of three months. According to Section 31 of the Act, an offence committed u/s 11 is cognizable in nature, thus vesting the police with wide powers to act immediately and effectively, to crack down any offence committed thereof.

For the purpose of treating diseases and alleviating sufferings of human beings, animals and plants, experimentation on animals is made lawful under the Act. The experiments carried out by various institutions are regulated by the Committee for the Purpose of Control and Supervision of Experiments on Animals (CPCSEA). This Committee is empowered under the Act to make regulations ensuring that animals are not subjected to unnecessary pain or suffering. Section 18 of the Act vests the Committee with the power to enter and inspect any institution or place where such experiments are carried out. If it is found during the inspection that the rules are not being complied with, the Head of the institution or the person-in-charge will be guilty of an offence and will be punished in accordance with the provisions of Section 20 of the Act.

In order to ensure effective implementation of the provisions of the Act, special powers have been vested with the Police and the Courts. The Police, under this Act, have the authority to seize any animal if they have reason to believe that such animal has been subjected to cruelty or may be subjected to cruelty, and produce it before a magistrate or a veterinary officer for examination. The Courts are empowered by the Act to forfeit an animal to the government, upon the conviction of its owner for an offence committed under the Act. The State Governments are therefore required to appoint infirmaries for the treatment and care of animals, against whom any offence is committed. The Act further empowers the Central Government to make rules to carry out the purposes of this Act.

The provisions of the PCA Act, although being holistic in nature, its implementation on the ground has been a failure. Animal and human face-off has only increased and as a result, in the recent few years, some horrifying cases of cruelty to animals have been reported all over India. In 2016, Kerala government carried out a mass killing of stray dogs in the State in order to curb the canine population. Association and groups were formed for the purpose of training children to kill stray dogs and subsidized airguns were made available to the people. Even the business communities promoted the culling process by providing incentives. Killings were carried out in public by some groups; one such social worker Jose Maveli was arrested for seven public killings but every time he got away by paying the paltry fine of 50 rupees, as provided under the PCA Act. This incident was highly criticized by the animal welfare groups and it was only after the intervention of Supreme Court that the menace was brought to a halt.

Involvement of animals in religious practices has led to a conflict between human and animal interests. In the name of religious practices, animals are often subjected to unnecessary pain and suffering. One such controversy came to the fore, with respect to the age-old practice of Jallikattu, in Southern India. It is a traditional bull-taming practice, organized during the festival of Pongal. The exercise involves a challenge wherein, the bull needs to be tamed by humans, using their hands. To make the process even more challenging, the bulls are often pierced and burned to make them more aggressive. In 2017, the Supreme Court, considering the practice as a cruelty to animals, banned  it. This is, however, not a sole practise; bullock cart races are another such event wherein bulls become a victim of religious cruelty. Bull races are frequently organized in various states like Maharashtra and Karnataka. During the races the bulls are whipped in order to make them run faster.  Being an integral part of culture it becomes very difficult to stop such practices. Recently, in light of great cultural importance attached with the sport of Kambala (bull race in Karnataka), the President gave his assent to the Prevention of Cruelty to Animals Act (Karnataka Amendment) Bill, 2017, which excluded the race from the purview of the PCA Act.

In order to curb the cases of cruelty against animals, there is a requirement of stringent laws with a higher degree of punishment. The paltry fines provided under the PCA Act fail to act as a deterrent. The punishments should be commensurate with the gravity of the offences provided under the Act. Moreover, there lies a huge awareness gap, as the general public is not conscious about the existing laws. This lack of awareness makes them indifferent towards various incidents of animal cruelty taking place around them. Moreover, there is a lack of understanding on their part as to why exactly should animal rights hold any importance. Guided by the concept of speciesism, they fail to acknowledge the feeling of pain and suffering that both human and animals have in common. Even the law enforcement authorities are not vigilant enough to implement the provisions of the law. Due to lack of much awareness, Police Officers fail to understand the seriousness of such offences, thus overlooking their commission. Awareness programs regarding animal rights and their need, among various stakeholders, can bring about a crucial change in the way we perceive the existence of animals. Judicial activism involving active participation of various Judges, Lawyers and animal right NGOs can be very effective in fulfilling the purpose of the existing laws. Active media coverage in relation to crimes against animals, followed by on-air expert discussions, can help in disseminating information on a larger scale. With these efforts, we can ensure that non-human species are alleviated from their miserable conditions as it is only then true justice will be done to them.