Rohingya are one of the world’s largest and most prominent groups of stateless people, trapped not only in a protracted refugee situation, but also in a protracted situation of statelessness. In 2015, to escape systemic violence and persecution from the Burma government, thousands of Rohingyas migrated from Burma and Bangladesh, collectively dubbed as the ‘boat people’ by international media, to Southeast Asian countries including Malaysia, Indonesia and Thailand by rickety boats via the waters of the Strait of Malacca and the Andaman Sea. The United Nations High Commissioner for Refugees estimates that about 25,000 people have taken to boats between January and March, 2015. There are claims that around 100 people have died in Indonesia, 200 in Malaysia and 10 in Thailand during their journey. 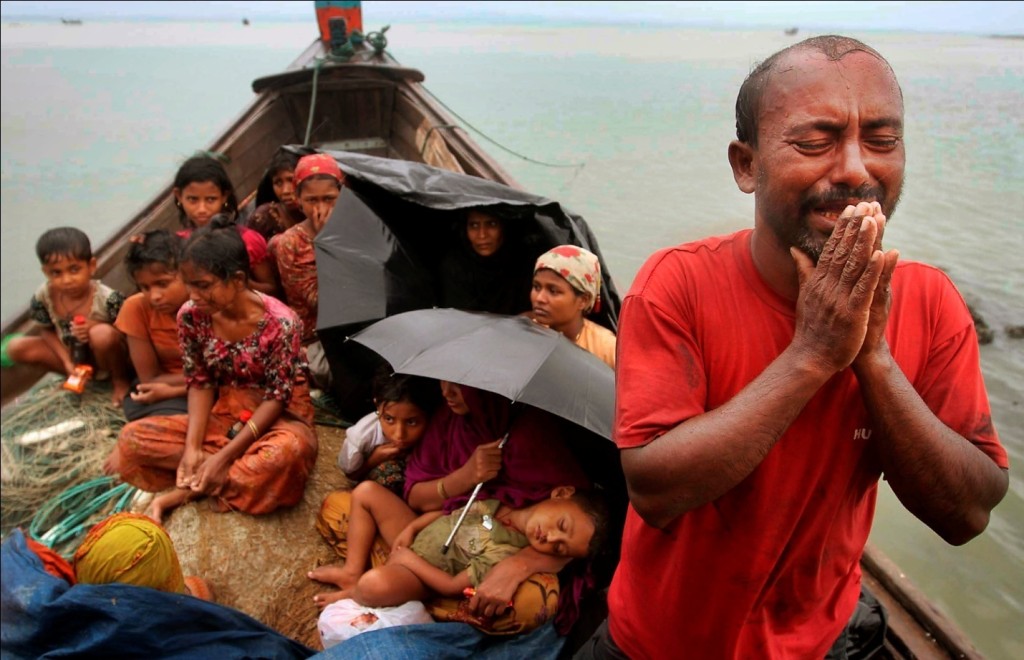 The Rohingyas (also known as Arakani Muslims) are an ethnic minority living in the north – western Rakhine (Arakan) state of Myanmar. At present, Myanmar is constitutionally a Buddhist country. Before 9th century, there was no Muslim in Arakan. The majority people were Buddhists and a negligible portion of Hindus were also there in existence. The first contact Arakan had with Islam was through Muslim sea men from the Arab world in the 9th century. Charmed by the natural wealth and beauty, the Arabs started to live there. In the British period, a great number of Muslims from the Indian sub – continent migrated to Arakan.

Rakhine and Rohingya are two different ethnic groups of Myanmar. The difference between them is basically one of religion. Rakhine are followers of Buddhism whereas Rohingyas are followers of Islam. Before 1942, no adversity was seen between these two ethnic groups and they lived in harmony with each other. However, in the Second World War, Japan invaded Myanmar and captured a large part. At that time, Muslims supported the British whereas the Buddhists supported the Japanese, as Japan was a Buddhist country. Consequently, in the Japanese controlled Buddhist majority regions, the Muslims were persecuted and many fled to the relative safety of the British controlled Muslim zone in Arakan. At the same time, Muslims drove out Buddhists in northern Arakan. From this time, the harmony and peace between Rohingya and Rakhine has been deteriorating.

Following the independence of Myanmar in 1948, the U Nu government (from 1948 to 1958) recognized the Rohingyas as a distinct indigenous ethnic group. However, the Rohingya’s citizenship was increasingly questioned by the military junta. They were rendered officially stateless on 15th October, 1982 because of the Citizenship Act of 1982 based on jus sanguine (principle of nationality law by which citizenship is not determined by place of birth but by having one or both parents who are citizens of the State) promulgated by the late dictator, Ne Win’s Burma Socialist Program Party (BSPP). As a result, the Rohingyas have been denied the right to citizenship and even the right to self identity. Further, the military rulers sowed the seeds of hatred and resentment among the Buddhists against the Rohingyas, resulting in inter communal violence.

Presently, there are at least 8,00,000 people who identify themselves as Rohingya living in western Myanmar’s Rakhine state. For decades now, these people have been suffering social, political, cultural and legal discrimination. There exists long standing tensions with the Buddhist Rakhine community over land and resources. The Rohingyas are subject to many restrictions – they are banned from travelling without authorization and prohibited from working outside their villages, they cannot even get married without permission from the authorities and they lack sufficient access to food, medical care and education.

In June, 2012 communal violence between the Rakhine Buddhists and the Rohingyas led to massive sweeps resulting in the detention of the latter. In October, 2012 security forces destroyed the homes of the Rohingyas, which led to the latter’s flight. Against this backdrop, many Rohingyas were forced to migrate to nearby Bangladesh, others fled to Thailand, Malaysia, India, Pakistan and the Middle East. Due to their deplorable living conditions, every month, up to 7,000 people – including women and children escape on precarious boat journey’s to neighboring countries. Many do not survive these journeys and others fall prey to human trafficking or end up exploited as forced labor.

An estimated 2,00,000 Rohingyas fled to Bangladesh from 1978 onwards. A new wave of an estimated 2,50,000 Rohingyas arrived in Bangladesh in 1991. The government of Bangladesh had set up 20 camps in Cox’s Bazaar and Bandarban during 1991-92 influx to accommodate Rohingya refugees. At present there are only two camps remaining. Nationality issues in Bangladesh are with the jus soli provisions of the 1951 Citizenship Act, according to which every person born in Bangladesh acquires citizenship automatically at birth, the Act also recognizes citizenship by descent and, as a result of amendments adopted in 2009, guarantees equal rights for male and female citizens to transmit their nationality to children. National authorities, however, refuse to register Rohingyas at birth or provide marriage certificates. Many Rohingyas live in difficult conditions with inadequate food intake, few livelihood opportunities and limited access to education and health care. Many households are female headed, which increases exposure to exploitation and gender based violence. The situation of Rohingya refugees in Bangladesh is defined as “a forgotten crisis” by European Commission’s Humanitarian Aid and Civil Protection department.

Bangladeshi authorities fear that the influx of Rohingyas would exacerbate the problems of a country already facing chronic poverty and high population density. Moreover, Bangladesh does not recognize many undocumented Rohingyas as refugees since it is not a signatory to the 1951 Refugee Convention or its 1967 Protocol. Bangladesh is now taking steps for relocating thousands of Rohingya refugees who have spent years in camps to a southern island. Recently, Thailand has cracked down on smuggling after the discovery of mass graves. Malaysian media have also reported that 139 grave sites and 28 abandoned camps have been found near the Malaysian border. With most countries unwilling to accept Rohingya refugees, their future as a people is uncertain.

After her election to Parliament in April, 2012 Aung San Suu Kyi called for new laws to protect Myanmar’s fractious ethnic minority groups, including the Rohingyas, in her first speech to the Parliament on 24th July,2012 highlighting one of the country’s most challenging issue. However, Suu Kyi was criticized by Human Rights Watch for not calling for an immediate solution to the Rohingya crisis. The government of Myanmar should live up to its democratic responsibilities by taking all the necessary measures to stop violence in the Rakhine state and to fully accord the rights of citizenship to Muslim Rohingyas. If Myanmar is unwilling or unable to protect the human rights of Rohingyas, or is actively involved in violating those rights on a significant scale, then the world community has a responsibility to step in and ensure that these rights are protected.

Compensation for Migrant Labour in Delhi

Information about the issue: Accidents in construction sites are a very common phenomenon. In the Delhi region, there have been several such cases recently in which laborers have suffered severe injuries and even succumbed to Read more…

Legal scholar Dr Upendra Baxi recently opined that protecting human rights in the digital era is a complex challenge for governments everywhere and more so in the case of India. After reading through his article Read more…