Policy is a course of action, selected from various alternatives, that an individual or an organisation adopts, which influences the present and future decision making. Policy cycle is the most optimal model through which policies are made, put into action and evaluated. It is described usually in six stages, which are: agenda setting, policy formulation, adoption, implementation, evaluation and policy maintenance. It is understood as a cycle, as the outcome of the implementation of the policy will help in determining any alteration in the existing policy or the creation of a new one.

The process is descriptive, that is, merely a given method to organise policy making, however it faces trouble as it is too simple and straightforward for a complex world. It appears as an ordered process with a beginning where the policymakers first identify an issue, and an end, where they assess how successful the implementation and its impact have been in resolving the issue, however, policy making can begin, be altered or be discarded at any of these stages. Further, thousands of policy cycles interact in the policymaking system which makes it even more complex and unpredictable. 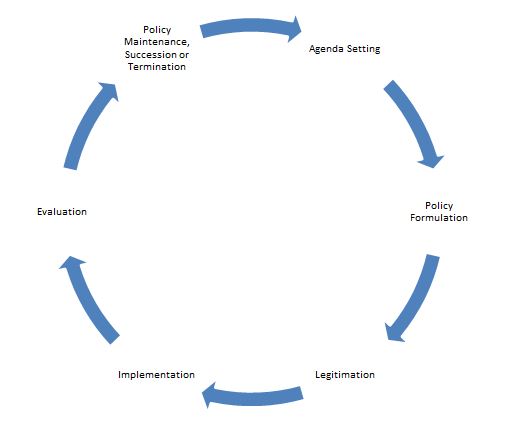 The stages of a policy cycle are as follows:

A. Agenda Setting: In this stage, the issues that are in need of government action are brought to the attention of the policy makers, and various aspects of these issues are assessed; the most concerning areas are prioritised. This assessment is helpful in determining the objectives of the policy. The definition of problem setting is always contestable and depends on the ruling government’s ideologies, their sight of benefits and prejudice. One of the main problems with policy making in India is the fragmentation in the structure. The Planning Commission was an institution in the Government of India, which formulated India’s Five-Year Plans and was then replaced with the NITI Aayog. These plans were then approved by the legislature. However, with the passing of years, more power has shifted into the hands of the executive. Other than this, India has adopted the parliamentary form of democracy, as well as a quasi-federal structure of governance, which means that there are various levels of hierarchy to be considered before setting objectives. Such fragmentation fails to recognize that actions taken in one sector have serious implications on another and may work at cross purposes with the policies of the other sector. Besides, it becomes very difficult, even for closely related sectors, to align their policies in accordance with a common overall agenda.

B. Policy Formulation: This is the stage that gives structure to the policy. Goals are set, costs are determined, policy instruments are chosen, possible effects are evaluated, and stakeholders are established. Multiple solutions are put forward, with consideration of meeting objectives within established limitations. Public policy is often prepared without sufficient input from sources external to the government, and without adequate examination of the issues involved. Some of the best experts in many lines of work lie outside the government, yet the policy processes and structures of government do not have efficient methods for obtaining inputs from external sources, which can prove to be detrimental to the groups affected by the policy as they too are often not involved enough; at times, different solutions with different impacts are not evaluated to the best extent. Before converting policy proposals into policies, a number of analyses like the cost-benefit analysis, economic forecasting, operations research and systems analysis, and budgeting analysis can be run using up-to-date data. Opinions of those affected by the policy should also be taken into account as it can influence the success of the policy.

C. Adoption or Legitimation: This is the stage of decision making where the best solution is chosen from amongst the different solutions that vary based on the policy instruments used. This approval of the policy may come from various sources- legislative, executive, in tandem with interest groups or from referendums. Policies require approval from various levels of the government before being adopted. India’s federal structure makes demarcations for certain legislative powers and duties, that is, the power to make laws on certain subjects is divided across Centre, the States or both. However, some of the autonomy provided to States is subject to financial requirements, which are often decided by the Centre. Friction or differences in understanding between the States and the Centre can also prove to be detrimental to the policy makers, where certain States refuse to follow the mandate of the Centre.

D. Implementation: This is with regard to how the policy will be put into action. This often means creating working networks where actors, resources and knowledge are connected. This may involve clear communication with the required agents, such as executive public bodies like the Ministry of Human Resource Development, or creating say, an organisation, to implement policy decisions. These agents will have to account for the usage of resources, whether monetary, human, legal or the likes.

Monitoring implementation is another important part of this stage. Proper implementation is critical to the success of any policy’s objectives. This means establishing a clear chain of command and putting effort into its coordination and control. This can come at a great expense to the government. The successful implementation of social sector schemes requires a high degree of political commitment and administrative coordination.

Aadhar linkage and Kerala’s Kudumbashree scheme are cited as successes. Aadhar, India’s biometric ID system, is used to avail multiple utilities, such as food rations, to those who are registered with the Aadhar Ecosystem. Kudumbashree through micro-credit and empowerment schemes like vocational training allows poor women at the grassroot levels to organise themselves.

In India’s case, while many policies of social inclusion have been put into place, the implementation has been suspect. Illiteracy, lack of awareness and lack of empowerment means the weaker sections of society, which any given policy is supposed to target, are often unable to access the benefits. It is also the case that the services offered by the government are usually of poor quality. Autonomy in implementation at various levels can help the cause. Execution of the policy is often hindered by confusion in the government as bureaucratic ineffectiveness, ineptitude and corruption confounds the policy implementation process.

Let us look into the example of the Right To Education Act, which made free and compulsory primary education a basic right for children of the age group of 6 to 14 years. It sets aside a 25% quota for children from economically and socially weaker sections in unaided, non-minority schools. It has been contended that there has been more focus on the quota than on the quality of education, with issues of teacher absenteeism, lack of teaching resources, lack of basic infrastructure, etc. This has resulted into high enrollment in schools, however, it has also responsible for high dropout rates. One could say that the policy is input oriented as opposed to outcome oriented.

Swachh Bharat Abhiyan also faced problems in having to adjust with mindsets of people, lack of proper waste management practices, often a lack of water, lack of sustainability of the provided infrastructure, as well as a lack of dedicated on-ground enforcers.

E. Evaluation: Government assesses the effect of the implemented policy at this stage. This is to determine how successful the policy was, in its impact, and whether the policy has been implemented correctly. This can be difficult to evaluate as the policies may have several objectives to meet. There may also be multiple ways to measure the impact which can lead to different evaluations on the effectiveness, depending on the standards of measurement used. Under the current government, NITI Aayog actively monitors and evaluates the implementation of government programmes and initiatives.

F. Policy Maintenance, Succession or Termination: This stage determines whether the policy is to be maintained by improving or further developing it. Often, if problems are identified with the current policies, they are either modified or terminated. Using the example of the Right to Education Act, the Centre is currently considering the extension of the Act to cover students till class 12, where currently it covers students till class 8.

Policy cycle is not only a model of policy making but is also a method of analysis of the policy process. This model does help us in looking at policy in orderly or organised manner but as expressed before, this can be overly simplistic for a complex and dynamic world.