The Kisan Long March of 2018 brought the grave situation of agrarian distress to the fore and built a consensus demanding policy intervention. Thus, the announcement of the PM Kisan Samman Nidhi Scheme (PM- KISAN) came as a form of confirmation of the ongoing agrarian crisis. The sixth installment of the scheme was rolled out by the Government from 1st August 2020. This Central scheme was announced in 2018 to benefit 14 crore small and marginal farmers with direct cash transfers of more than 75,000 crore rupees. Under this scheme, small and marginal farmers holding not more than 2 hectares of land are entitled to receive Rs 6,000 a year in 3 installments. After 2 cycles of the scheme being complete, it is important to look into its success and what it has been able to achieve in real terms.

It is being increasingly argued that the slump in the agrarian economy is due to the high input costs being borne by the farmers and the low returns in terms of income. This is happening, it has been rationalized, as agriculture is becoming ‘an unprofitable enterprise’. Moreover, the dependence of agriculture on rainfall is excessively high throughout the country except for a few places like Punjab and Haryana.

The PM KISAN has set the eligibility to entitlement for “all landholding farmer families having cultivable land holding up to 2 hectares, whose names appear in the land records of States/UT as on 01.02.2019”. Hence, farmer families holding more than 2 hectares of land will not be eligible under this scheme. Further restrictions have been made for institutional landholders, former and present holders of constitutional posts, Central and State government employees, professionals, and those who receive more than rupees 10,000 as monthly pension.

It must, however, be remembered that these wages are only applicable to the availability of work. Even under effective schemes like MGNREGA, the guarantee of work for 100 days leaves agricultural labourers with few income sources for the rest of the year. The Centre has tried to evade the question of inclusion of landless farmers and agricultural labourers by claiming that as agriculture is a State subject, the Centre has to only supplement the efforts of the State. This implies that as of now, the Central Government does not intend to bring crores of agricultural labourers and tenant farmers under direct income support. To provide tangible benefits to the poor associated with agricultural activities, the definition of farmers must be widened to include not only small and marginal farmers but also agricultural labourers and tenant farmers. This will be a difficult task, as identifying farmers without land holdings will be far more tedious than compiling data of land records from different States.

Policies must aim to systematically enforce positive conditions to those who need them the most. However, if we look at the three schemes- PM KISAN, Rythu Bandhu, and Krushak Assistance for Livelihood and Income Augmentation (KALIA) of the Centre, and States of Telangana and Odisha respectively, all were announced right before elections. This reflects that the driving philosophy behind these schemes might have more to do with winning over an electorate rather than providing a solution to the agrarian crisis raging in the country.

The problem of income support

This brings us to the question of whether Rs 6,000 per year is enough to supplement the financial needs of small and marginal farmers. The opposition has expressed dissatisfaction over this price since Rs 17 a day is hardly a support price when the rural poverty level is recognised as Rs 32. Therefore, the monthly sum of 500 rupees is insufficient for small and marginal farmers. On the other hand, if we look at the Economic Survey of 2016-17, the average annual income of farmers in 17 States in India is 20,000 Rupees which amounts to 1,666 Rupees a month. As we approach the question, however, we find the scales abysmally low pointing towards the extreme conditions of poverty faced by farmers. A sum of Rs 6000 a year cannot claim to lift anyone out of poverty but direct income support may prove effective by increasing subsidies for necessary inputs like fertilizers, seeds, etc. and legally implementing Minimum Support Price (MSP). Longtime advocates of direct income support observe that there has been a tectonic shift in economic thinking in India as till now farmers were left to the mercy of the market but now there is an instrument that can provide them with direct income support. Although 500 rupees does not provide tangible help to farmers, hopefully, it can be increased to Rs 5000 a month someday, for which the stakeholders and policymakers need to continue their advocacy efforts in the right direction.

The NABARD All India Rural Financial Inclusion Survey (NAFIS) 2016-17 reveals that the average outstanding debt per indebted household is Rs 1,04,602 and the average amount of loans taken from non-institutional sources is 63,645 rupees. As one of the stated objectives of the PM-KISAN scheme was to protect farmers from falling into the clutches of moneylenders, the numbers imply that it will take a lot more than the allotted PM-KISAN sum to bring the average small and marginal farmer out of indebtedness. The government will have to prioritize agriculture in their budgetary allocations as the amount offered by the present scheme is too less to make an impact. Farmers’ organizations and other stakeholders naturally demand direct income support of a much larger amount.

Need for careful and consultative intervention

The scheme enables the farmers to receive a direct income from the Government every 4 months. The Scheme does not, however, state any relevance of the sowing and harvesting seasons of India. As this is not a poverty alleviation programme and is intended to supplement the needs of the small and marginal farmers, the release of funds during the sowing and harvesting seasons as per the different types of crops for different regions would perhaps lead to optimal use of government resources. According to an RTI on the PM KISAN Yojana, only 75% of farmers have received all the installments of the scheme between December 2018 to November 2019. Thus, it is amply clear that the scheme will require careful administration to ensure maximum impact. Digitizing and updating of records are prerequisites for the implementation of this scheme.

The  success of the scheme is highlighted in helping those who are relatively more dependent on agriculture and less access to credit. To sum it up, the name of the scheme reveals its scope: direct income support as a gesture of ‘Samman’ or respect for the small and marginal farmers of India, intended to provide support to their existing income. Taking this policy to be the bare minimum support that the State can provide to resolve the bludgeoning levels of rural poverty, direct income support cannot be envisaged as the only way out of this crisis and the policymakers will need to consult the agricultural policy experts and farmer groups to improve the goals of the Scheme for attaining a far-reaching policy solution.

The COVID crisis has brought out one of the major downsides of the gig economy. With the current model that majorly favors the employers and has no protection for the employee in times of crisis, Read more…

India, one of the most populous countries in the world, can accrue a lot of benefits from its labor market. There lies the immense potential for India to be the largest provider of skilled labor Read more… 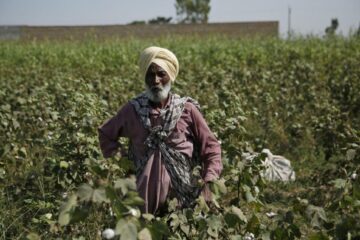 Need for Modifications in the provisions of The Farmers (Empowerment and Protection) Agreement on Price Assurance and Farm Services Act, 2020

Information on the Issue The Farmers (Empowerment and Protection) Agreement on Price Assurance and Farm Services Act, 2020 was introduced in the Parliament on 17th September 2020 by the Minister of Agriculture and Farmers welfare Read more…